The issue of childcare is in the news again today, following rumours of an imminent change to staff : child ratios in early years settings, and the publication of Quality Childcare: Improving Early Years Childcare, a new report from the Policy Exchange think tank which claims that childcare in deprived areas is worse than that on offer in wealthier areas. The new Policy Exchange report is the latest in a spate of recent childcare reports examing issues of cost and quality, so today's post attempts to round up and make some sense of all the latest research in this area.

To understand current government policy, it's probably worth looking at Affordable Quality: New Approaches to Childcare, a brief paper written in May last year by Elizabeth Truss, the current Parliamentary Under Secretary of State with responsibility for childcare. The paper advocates that the UK learn lessons from the Netherlands' model of childcare provision, leading to the publication a few months later of Double Dutch: the Case Against Deregulation and Demand-Led Funding in Childcare. This report was authored by the Institute for Public Policy Research (IPPR), and argues that the Danish model for childcare would be a more useful influence for policy in the UK.

Many of the most recent reports on childcare focus on the affordability of providing high-quality provision, particularly in light of the austerity agenda affecting so many services. So in no particular order, publications that deal with this issue include The Parent Trap: Illustrating the Growing Cost of Childcare (Social Market Foundation, Nov 11),  Making Work Pay - the Childcare Trap (Daycare Trust, Sep 11), Transforming Childcare: Changing Lives (Centre for Social Justice, Oct 2012) Childcare: Failing to Meet the Needs of Working Parents (Resolution Foundation, June 2011) and Counting the Costs of Childcare (Resolution Foundation, Oct 12). While the more recent The Nursery Sector in England, Scotland & Wales (National Day Nurseries Association, Jan 13) views the subject from a different point of view, summarising how nurseries are performing as businesses in the current climate.

The long-term benefits of high-quality childcare have been examined in many studies over the years. There are too many to list all of them here, but two recent(ish) reports that might interest readers include Early Intervention: Smart Investment, Massive Savings (Cabinet Office, Jul 11) and Starting Well: Benchmarking Early Education Across the World (Economist Intelligence Unit, 2012). The latter of these actually places the UK 4th in a league table of preschool environments in 45 different countries.

And finally, a batch of relevant reports from the DfE itself, though it should be pointed out that some of these were commissioned before the current government came into office, and so do not necessarily reflect government policy. With that in mind, try having a look at:
That's about as comprehensive a collection of reports from the last couple of years that I can manage. But if you're aware of other research that I've missed here, please share it with other readers by leaving a comment below. 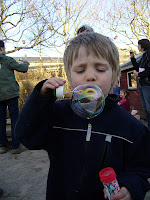 Email ThisBlogThis!Share to TwitterShare to FacebookShare to Pinterest
Labels: Childcare