The Early Years: an International Perspective

Tonight's #EYTalking topic on Twitter (see previous post for details) is all about sharing ideas and suggestions on what an international e-portal devoted to early years might look like. This follows a recent post on June O'Sullivan's blog outlining the reasons why such a site would be useful. So today's post attempts to draw together some of the most useful existing sites and recent reports to help you learn about early years practices from an international perspective.

You could do a lot worse than starting with the UN Convention on the Rights of the Child. This is the most widely ratified human rights convention in history, and can be accessed online either in full text, or a summary version is also available. You may also want to look at a UNICEF study from last year, which studied how the Convention has been legally implemented in 12 countries.

Looking at the topic from a European perspective for a moment, the Eurydice website has a page devoted to Early Childhood Education and Care which will give you some basic information on the early years setup in 36 different countries. On a similar note, the organisation has information on Compulsory Age of Starting School in European Countries. Still on a European note, earlier this year the European Commission published a report entitled Childcare Services forSchool Age Children: a Comparative Review of 33 Countries, and their 2009 report - Tackling Social and Cultural Inequalities through Early Childhood Education and Care in Europe - may also be of interest.

Looking further afield, the International Bureau of Education recently published a fantastic resource entitled Early Childhood Care & Education and the Curriculum: a List of Resources, which pulls together links to all sorts of early years documents from around the globe. The OECD also has a page devoted to Early Childhood and Schools, and its series of reports entitled Quality Matters in Early Childhood and Care should also be of interest. The Bernard van Leer Foundation website is another place worth visiting for information on all sorts of childhood issues.

There have been quite a few reports from various other organisations over the last few years which could also prove interesting. It might just be easier if I list these!
If you know of any useful websites or reports that I've missed, please share them with other readers by leaving a comment at the bottom of this post. You can also look at all previous posts on this site relating to international issues by clicking on 'International Resources' in the Hot Topics menu on the right-hand side of this page. 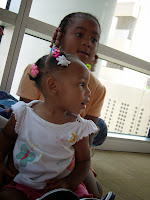 Thanks for the feedback and suggestion for further reading. If we're moving into paid-for resources, then Helen Penn's 'Quality in Early Childhood Services: an International Perspective' is also well worth a look: http://amzn.to/1aszViW